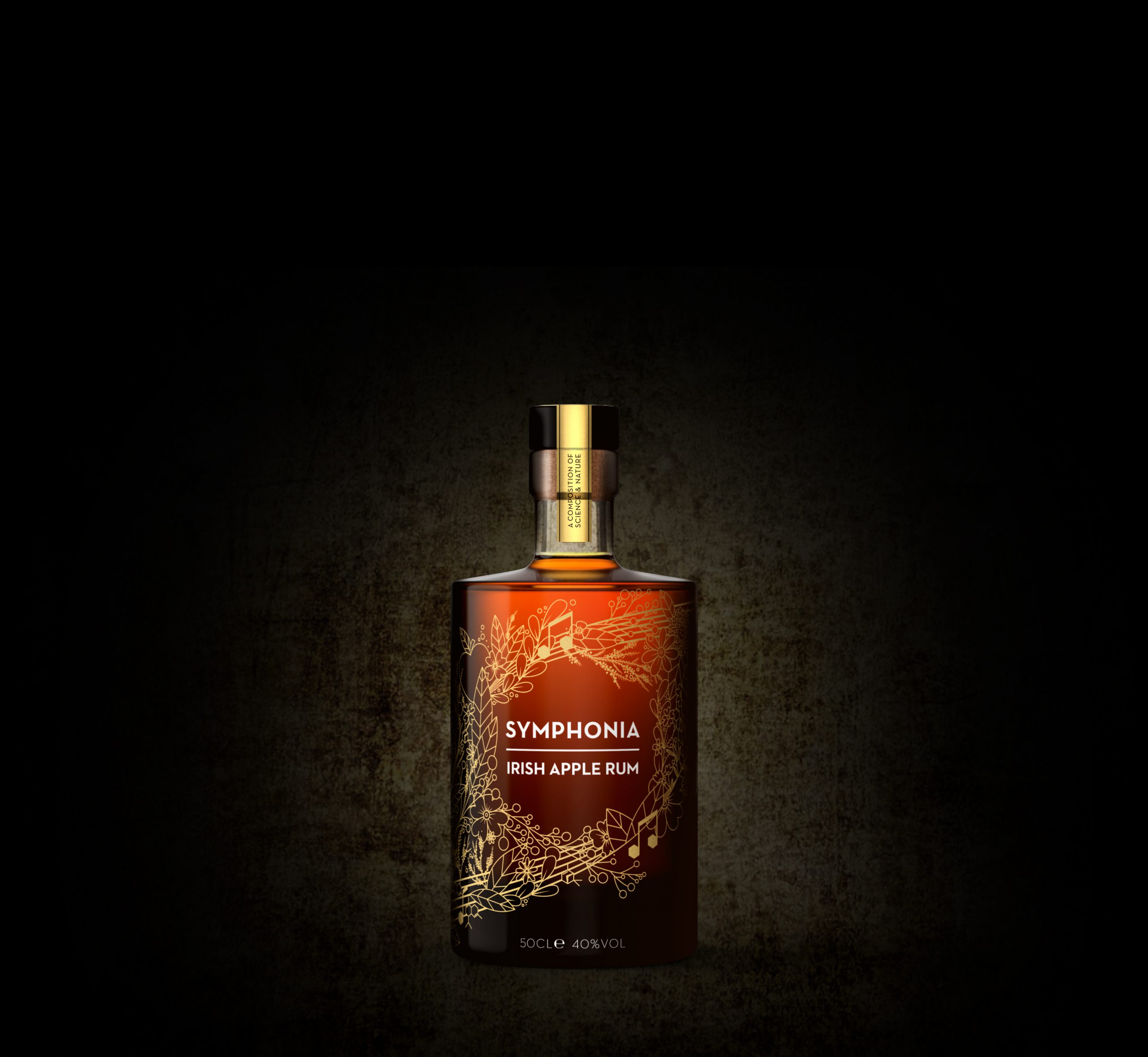 I am delighted to introduce Symphonia Apple Rum, our very first rum and our first foray outside the world of gin.

Caribbean rum has been redistilled with local botanicals, adding a gentle spiciness, then infused with sweet Jonagold apples from Armagh, making this spirit taste like apple pie in a bottle.

When we begin thinking of new products, it is really important to make the most of local Northern Irish produce. Whilst I’ve showcased the Armagh Bramley apple in our Apple Gin, I started to think about what we could do with Jonagold apples. These are a cross between Jones and Golden Delicious which grow alongside our Bramley apples here in the Orchard of Ireland. I thought these delicious sweet dessert apples would be better paired with a rum, rather than the crisp green apple of a Bramley which works so well with the juniper in gin.

The final inspiration came as I was exploring botanicals from my garden and the local Northern Irish countryside. One of these stood out, as I saw through my chemical analysis that it had flavour molecules closely related to those of nutmeg and cloves. These spicey warm flavours are more commonly associated with exotic spices, not a plant which grows abundantly in the garden here in Benburb. This particular plant also holds sentimental value as when we moved over to Ireland I brought a tiny cutting of the plant which my late father gave me, and it has now flourished here in the garden. I knew these spicey flavours would be the perfect partner to the sweet Jonagold apples.

We are really bringing something new to the table with our Apple Rum, as previously rum has often been about the spirit being the dominant element with oak ageing, or heavy spicing with vanilla and cinnamon. Here the Jonagold apples are the star of the show, and rum is the soft spirit element that plays the supporting role. The local botanicals introduce the flavours of nutmeg and cloves in a subtle way, not to overpower the apple but to complement, working in harmony just as they work so well in an apple pie.

To serve, we think it works best neat on the rocks, or long with lemonade and a garnish of pink grapefruit. Or for something different try it drizzled over ice-cream, or even replacing our Apple Gin in a warming hot toddy for those cold winter nights.

Now I’m sure you can’t wait to get your hands on some!

'Move over Guinness' - those are the words of a highly respected wine writer for The Guardian who features our Symphonia range in her recommended gins list IT'S always fantastic to see your product being featured in the media so when Fiona Beckett, the wine writer for...

END_OF_DOCUMENT_TOKEN_TO_BE_REPLACED

We’re all trying to do our bit for the environment, and Symphonia Gin is no different. In my last post I talked a bit about how the gin making process for Symphonia is different from regular still distillations, and how this contributes to the fantastic balanced...

END_OF_DOCUMENT_TOKEN_TO_BE_REPLACED

Symphonia No 1 Dry Gin has won a Silver medal in the prestigious International Wine and Spirits Competition. This is such a coup to be recognised by key international influencers from the wine and spirit industry.

END_OF_DOCUMENT_TOKEN_TO_BE_REPLACED

Distillery with a difference

Exploring the unique distillery process behind Symphonia Dry Gin. Last year when we were out and about at events across the country, people often asked me about the name of the gin, and “Why Symphonia?”. The name reflects the unique gin-making process. In Symphonia,...

END_OF_DOCUMENT_TOKEN_TO_BE_REPLACED

The best gin in Ireland moves to Moy

The best gin in Ireland moves to Moy. Into our new custom gin distillery After three years setting up and establishing Symphonia Gin from my adapted garage-come-laboratory It is time for me and the growing Symphonia Gin team to move on and expand into our new...

END_OF_DOCUMENT_TOKEN_TO_BE_REPLACED

The perfect landscape for Bramley Apples

Last month we wrote a feature on the Apple blossom on our apple trees and how it had really flourished this year. Our Symphonia Apple Gin is made with crisp, golden Bramley apples sourced locally from county Armagh and so it’s important to realise what makes them so...

END_OF_DOCUMENT_TOKEN_TO_BE_REPLACED

In these most challenging of times we hear all sorts of stories of how people and business are forced to change direction and focus on how best to support the community.  Here at Symphonia we have a fascinating case, not only change of direction, but of going full...

END_OF_DOCUMENT_TOKEN_TO_BE_REPLACED

They say necessity is the mother of invention which is true, no truer than now in these times, it is also necessity that inspires the good and the great in people.  Here in the early days of the Covid-19 outbreak healthcare professionals were desperate for the PPE...

END_OF_DOCUMENT_TOKEN_TO_BE_REPLACED

Nestling within the rolling green hills of County Armagh and bordered on one side by the broad expanse of Lough Neagh is a specific micro-climate where the temperature rarely falls below 3oC and rarely rises above 18oC.  Aided by a rich, fertile soil high in calcium...

END_OF_DOCUMENT_TOKEN_TO_BE_REPLACED

Come along to the NEC from November 28 to December 1 and taste our award winning gins at the BBC Good Food Show at Birmingham’s NEC. Check out the prestigious list of chefs who’ll be cooking a the event.

END_OF_DOCUMENT_TOKEN_TO_BE_REPLACED

Symphonia Gift packs – a sneak peek under the Christmas tree!

Yes I can’t believe it either, but it’s that time of year again, and Christmas will soon be here. At Symphonia Gin we have been busy stocking up on our popular gift packs, ready for all your gin-loving friends and family. These have been hugely popular for our last...